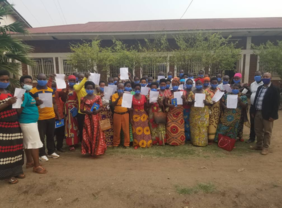 German Sparkassenstiftung Eastern Africa (DSIK) in Burundi, in collaboration with Réseau des Institutions de Microfinance (RIM) and Care International in Burundi joined forces for the Savings Mobilization Campaign Edition 2021. The campaign's theme was "Gender and Women's Financial Inclusion".  This approach integrates capacity building of women in various areas of socio-economic life grouped in Village Savings and Loans Associations (VSLAs), and it helps them to develop, by getting more involved in the financial management of their households, which gives them a certain economic autonomy from their husbands.

During this campaign, 350 couples (wives and husbands) received financial literacy training in which they decided together on savings goals for the well-being of their families. This campaign was conducted from August 30th to September 10th in seven provinces (Bubanza, Cibitoke, Rumonge, Gitega, Ngozi, Bururi and Kayanza) forming the intervention zone of the rural campaign.

Usually each year, DSIK and its various partners conduct savings campaigns in all its project countries. In Burundi, this year's campaign is targeting the rural areas because this time of the year is the peak of the harvest season when the farming population has money (financial means) from the sale of agricultural products.

Implementation of the Credit Rotation Fund (CRF) in Kenya